One of the arguments presented by opponents (and in some cases, supporters) of MMT is why pay any taxes if the US government can just print all the money (i.e. issue debt) it will need to balance its budget (by definition, if federal income taxes are zero, all revenues would come from the sale of debt). And while the US is still several years away (at least) from full helicopter money, i.e. MMT, which would be required to pay for such whims as, say, the Green New Deal, it wouldn't be surprising if overtures were made by politicians to trim taxes in order to either boost the economy or their approval rating.

According to the WaPo, one such idea is currently percolating in the White House, where several senior officials have reportedly begun "discussing whether to push for a temporary payroll tax cut as a way to arrest an economic slowdown." Citing three people familiar with the discussions said, the proposal is said to reflect the growing concerns by President Trump’s top economic aides.

As the report further details, the talks are still in their early stages, and the officials have not decided whether to formally push Congress to approve the cut. "But the White House in recent days has begun searching for proposals that could halt a slowing economy."

As a reminder, most taxpaying Americans pay a payroll tax on their earnings, which amounts to 6.2% of their gross income, which is used to finance Social Security programs.

Where may Trump officials have gotten this idea? Trump's predecessor comes to mind, as the payroll tax was last cut during the Obama administration to 4.2% as a way to encourage more consumer spending during the recent economic downturn. But the cut was allowed to reset back up to 6.2 percent in 2013.

Of course, since the WaPo may simply be pursuing its own agenda of representing a slowing economy in hopes of denting Trump's approval rating which over the past two years was predicated upon Trump's claims of the "strongest economy ever", whether or not such a proposal is actually getting serious consideration remains in question.

And indeed, according to CNBC's Eamon Javers, the White House publicly denied the WaPo report, saying that "cutting payroll taxes is not something under consideration at this time", to wit:

WH official pours cold water on payroll tax cut idea floated in the Washington Post today: “As Larry Kudlow said yesterday, more tax cuts for the American people are certainly on the table, but cutting payroll taxes is not something under consideration at this time.”

WH official pours cold water on payroll tax cut idea floated in the Washington Post today: “As Larry Kudlow said yesterday, more tax cuts for the American people are certainly on the table, but cutting payroll taxes is not something under consideration at this time.”

Still, while a payroll tax cut may not be imminent, the report does bring up a thought experiment that would be especially applicable if and when US rates approach zero, or turn negative, at which point the US can effectively implement an MMT-lite, whereby it would issue as much debt as it desires (especially if Germany refuses to take advantage of negative rates), and use the proceeds to fund shortfalls that would result from aggressive Federal tax cuts at the personal income or corporate level.

Whether or not that will happen, remains to be seen, however in a world where there is a $17 trillion in negative yielding debt, and where the US has emerged as the last remaining source of IG-rated yield as we pointed out last week... 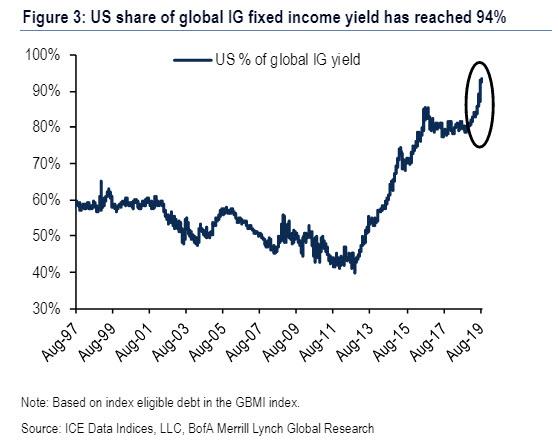 ... it is likely just a matter of time before this lite version of helicopter money receives much more serious consideration, whether by the current administration or the next.