Update 5: Fla. Sen. Rick Scott has called for an end to the program that brought the Pensacola shooter to the US.

Update 4: The shooter has been identified as Mohammed Saeed Alshamrani, a member of the Saudi Air Force who was in the US for flight training (so on official government business).

A member of the Saudi Air Force, per Florida governor https://t.co/CbGkYmoRdY

Still, police warned they would need "a little time" before they can make any determinations in the case.

"Don't expect quick answers" on motive for shooting," Escambia County Sheriff David Morgan told reporters at a press conference. "Give us a little bit of time and we'll provide all the answers we can for you."

"Don't expect quick answers" on motive for shooting, says Escambia County Sheriff David Morgan. "Give us a little bit of time and we'll provide all the answers we can for you." pic.twitter.com/sMXEiVLThE

The AP is reporting that the suspect in Friday's shooting at a Navy base in Pensacola, Fla. is a Saudi Arabian national. He was attending aviation school in the US, which should raise eyebrows: The last group of Saudi nationals who sought flight lessons in the US pulled off 9/11.

However, his name apparently wasn't released.

It's still unclear whether the shooting is terror-related, authorities said, but they are diligently investigating. It's unclear if the attacker was there on government business or simply as a private citizen, the AP reports.

The shooter opened fire in a classroom building on Friday morning, which suggests he was on the base for a reason. The assailant managed to kill three others before he was killed by officers with the Escambia County Sheriff's Office, who arrived on the scene and fatally shot the suspect after exchanging gunfire. FBI and ATF agents also responded to the scene.

At least eight others, including two police officers, were wounded in the cross-fire.

President Trump tweeted that he just received a "full briefing" on the shooting, and discussed it with Florida Gov. Ron DeSantis.

Just received a full briefing on the tragic shooting at NAS Pensacola in Florida, and spoke to @GovRonDeSantis. My thoughts and prayers are with the victims and their families during this difficult time. We are continuing to monitor the situation as the investigation is ongoing.

Update 2: CNBC reports that three people have now been confirmed dead and at least ten have been hospitalized. It's still not clear what motivated the shooting.

Update: The shooter in Pensacola has been killed, Escambia County Sheriff’s Office confirmed in a Facebook post.

Police added that two people have been confirmed dead, including the suspect, in what was the second shooting on a naval base in the span of 48 hours. Police and ATF agents initially responded to the shooting, according to ABC News.

An unknown number of people have been taken to the hospital, according to Lt. Cmdr. Megan Isaac, a Navy spokesperson.

Nine patients were admitted to Baptist Hospital in Pensacola, but the hospital wouldn't release their condition.

An unknown number of injured were taken to the trauma center at Ascension Sacred Heart Hospital.

Navy public affairs officer Jason Bortz said reports of the shooting first arrived at around 6:30 am on Friday.

"Both gates of NASP are currently secured due to reports of an active shooter," a post said early Friday on the station's Facebook page.

President Donald Trump has been briefed on the shooting and is monitoring the situation, the White House said.

Just days after the deadly shooting at Pearl Harbor's Naval Shipyards, CNN is reporting that Pensacola Naval Air Station is currently on lockdown and Escambia County Sheriff's Office confirmed that authorities are working to "take down" an active shooter on base.

Jason Bortz, spokesman for NAS Pensacola, confirmed to the News Journal that an active shooter was reported sometime around 7 a.m. Friday. Both gates are closed and the base is on lockdown. 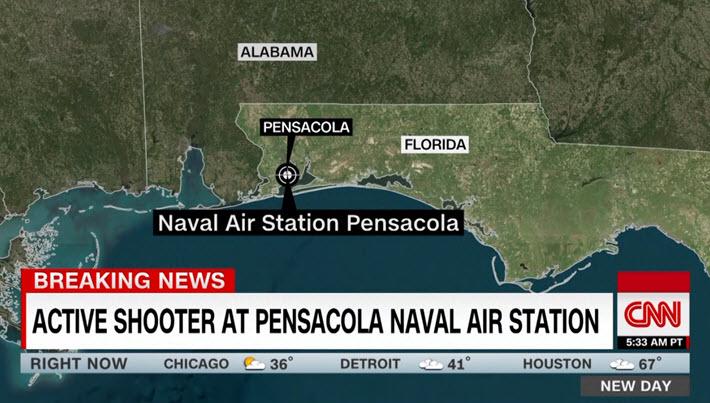 Amber Southard, spokeswoman for the ECSO, said little information is available at the moment, but shots have been fired on base and a heavy law enforcement presence is there to eliminate the threat.

Three medical helicopters are in route and several military ambulances have also been seen in the area. 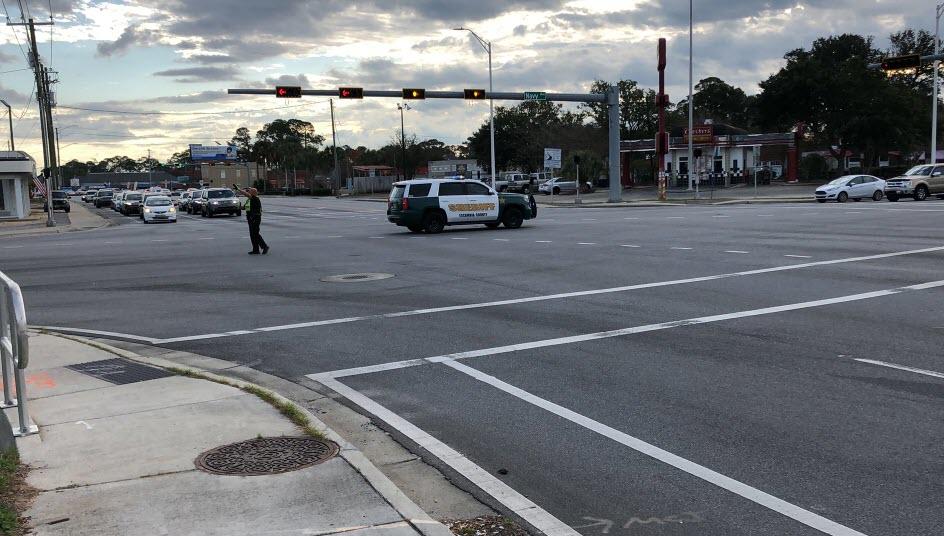