Gun sellers are taking to Facebook's Marketplace to broker sales, exploiting a loophole despite the sale of guns being specifically forbidden by Facebook policy, according to the Wall Street Journal. Facebook's Marketplace feature was launched four years ago and has allowed more than 2 billion people to buy and sell secondhand items.

The trick being used by sellers is to list gun cases or gun boxes at inflated prices that indicate to those "in the know" that a gun is also being sold. This helps users evade Facebook‘s banned items policy. Buyers and sellers then communicate via private messages to discuss the details of the transaction.

For instance, one seller in North Carolina this month posted a photograph of a "gun case" that was being listed for $950. The case itself only has a retail cost of about $30. When the seller was interviewed, he indicated that he was actually trying to sell an AR-15, not just the case. He then privately shared a photograph of the rifle, laid out with more than 670 rounds of ammunition Dash and, of course, the case. He told the Wall Street Journal that he had more than 30 inquiries regarding the gun since he listed the case and had found an interested buyer last week, but a meeting scheduled with them fell through. 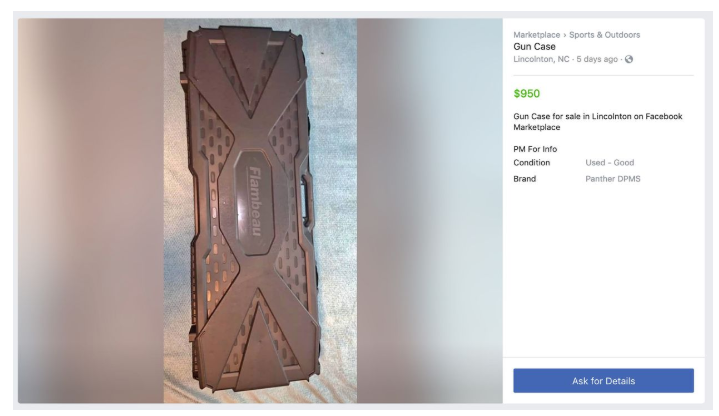 Naturally, these types of postings are going to raise fresh scrutiny about Facebook‘s ability to police its platform, especially as it helps to grow its Marketplace to try sell more advertisements. Facebook's Marketplace remains a giant in online sales outlets, with "one in three people in the US visiting the site each month".

Facebook has tried to tackle the issue of gun sales before. The company said in 2016 that it would ban the private sale of guns on its broader social media platform following users selling them in "groups". Licensed gun sellers were allowed to keep their Facebook pages, but Facebook quickly had to issue apologies after launching its Marketplace - users almost immediately started listing guns and drugs for sale on the site.

A spokeswoman for the company said that it takes immediate action against people caught selling guns on the site and said that both humans and machines are being used to screen content. 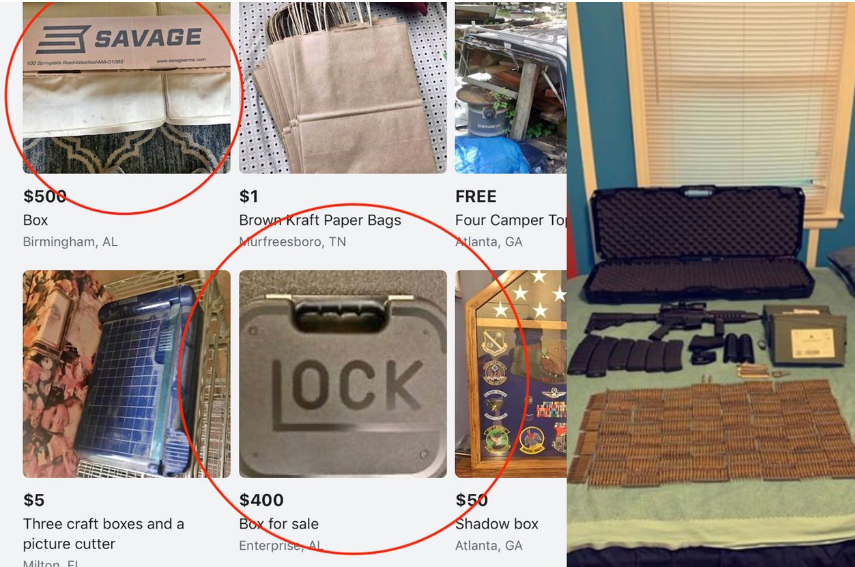 The spokeswoman said: “Selling guns on Facebook is a clear violation of our policies. People buying and selling on Marketplace must comply with all local laws. The company’s enforcement of its policy will never be perfect, but we are always looking for ways to improve our policies and enforcement.”

Access to guns remains one of the biggest hot-button issues heading into the 2020 election, stoked by recent shootings in Dayton, Ohio and El Paso, Texas that killed 31 people. Federal law doesn’t require background checks for private sales of firearms, but many states do. Sales of firearms across state lines are supposed to be furnished through federally licensed gun dealers who have to undergo background checks themselves, but prosecution for violation of this law is rare.

This makes the internet a perfect place for those who are barred by federal and state restrictions from owning guns to garner access to them. The one on one transactions help make Facebook's Marketplace a mainstream meeting place for buyers and sellers looking to make private deals. 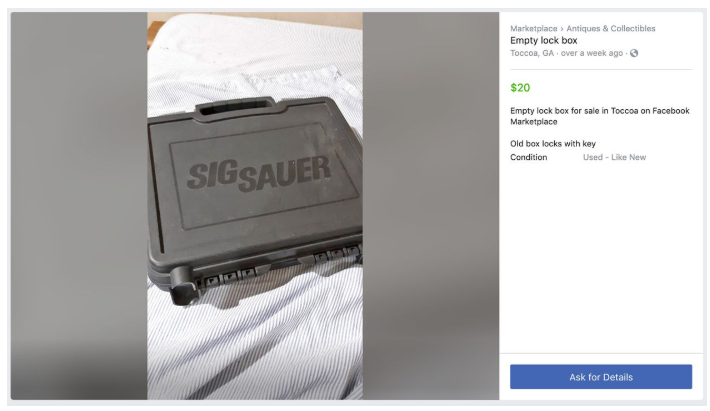 Searches for the term "gun case" on the Marketplace earlier this month found dozens of overpriced cases across 10 cities in the US. The prices ranged from $300 to $2000 for products that normally don’t retail for more than $50. And a search for the term "gun case" in Atlanta resulted in three matches within 100 miles. From there, Facebook’s own algorithm suggested more gun case postings in its "You May Also Like" section.

In St. Louis, 19 of the first 24 products recommended by Facebook were overpriced gun cases.

One gun seller in Texas said that he had received 70 inquiries over a month about his posting of a case representing a Remington sniper rifle. He said it had been viewed 2000 times as of August 14. The case retails at about $270 and was listed for $4500. Another seller in Georgia that was offering a "empty lock box" priced at just $20 said in a private message he was selling a SIG Sauer semiautomatic pistol.

Rob Disner, a sound mixer in Atlanta, noticed the postings while searching for guitar cases.

“I probably saw dozens before asking, ‘Why is a plastic case $650?’ Now I see gun cases all the time.”

He said he notified Facebook of the posts, and about "half" were subsequently taken down.