In what some may call the 'worst' affirmation of a 'AAA' rating, Fitch has published a somewhat damning set of reasons why that AAA-rating may not last due to soaring debt, shrinking GDP, and the "helicopter-money" anti-virus actions.

Notably, the sovereign credit risk of USA has been notably rising since 'helicopter money' began to make the mainstream two weeks ago... 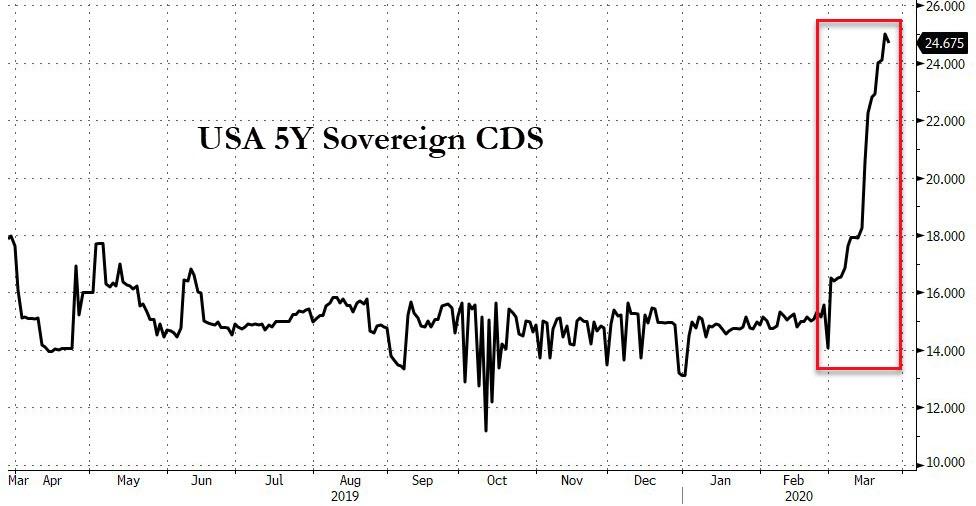 The U.S. sovereign rating is supported by structural strengths that include the size of the economy, high per capita income and a dynamic business environment. The U.S. benefits from issuing the U.S. dollar, the world's pre-eminent reserve currency, and from the associated extraordinary financing flexibility. Fitch considers U.S. debt tolerance to be higher than that of other 'AAA' sovereigns. However, high fiscal deficits and debt -- which were already rising even before the onset of the huge economic shock precipitated by the coronavirus -- are starting to erode these credit strengths.

The risk of a near-term negative rating action has risen given the magnitude of the shock to the economy and public finances from the coronavirus and the commensurate and necessary fiscal policy response, particularly in the absence of a credible consolidation plan for the country's pre-existing, longer-term public finance and government debt challenges.

The coronavirus has inflicted an unprecedented shock on financial markets and economic activity, with policymakers struggling to avert a longer-lasting downturn. In common with other advanced countries, the U.S. has shut down parts of its economy to slow the spread of the disease, which will cause a deep contraction centered on second-quarter 2020 (2Q20) and a massive rise in unemployment. In its baseline, Fitch assumes containment measures can be unwound in the second half of 2020 (2H20), allowing for recovery in sequential growth and labor markets. With so much depending on the progress of the virus, there is a large degree of uncertainty around our economic forecasts.

In Fitch's evolving baseline forecast, U.S. GDP would shrink by around 3% in 2020 (although this could be subject to further revision), an unprecedented occurrence in peacetime and a deeper contraction than in 2009. In the event of the virus being contained during 2H20, Fitch assumes that real GDP growth will recover strongly in 2021, reflecting a sharp bounce-back. A plausible downside case, including a second wave of infections and longer lockdown periods across parts of the country, would see an even larger decline in output in 2020 and a weaker recovery in 2021.

The U.S. will use its full range of policy tools to combat the crisis, including the USD2 trillion fiscal stimulus package and the Federal Reserve's commitment to purchase unlimited quantities of treasuries and mortgage-backed securities, underpinning a huge coordinated policy response. U.S. reserve currency status (the U.S. dollar accounts for over 60% of global foreign exchange reserves) and policy credibility have underwritten the aggressive monetary policy response designed to keep financial markets functioning. The Federal Reserve cut interest rates to zero on March 15, re-opened the discount window for banks, bolstered U.S. swap lines with foreign central banks, announced massive Treasury and agency bond-buying, and subsequently received 13(3) authority from the Treasury Secretary to buy up to USD1 trillion in commercial paper. A Primary Dealer Credit Facility will accept a wide range of collateral. Banks are stronger than in 2008 and Federal Reserve actions appear to have headed off risks to the core of the financial system, but leverage in parts of the corporate sector increases vulnerabilities.

As fiscal and monetary policy effectively merge, government will spend in order to cushion the income losses suffered by households and businesses and lessen the destruction of potential output. Congress is set to pass a USD2 trillion stimulus package of revenue and spending measures, including increases in unemployment assistance, cash transfers to individuals, transfers to states and more money for the public health system.

The degree to which the economy recovers and the extent to which the fiscal stimulus is eventually unwound will be key rating considerations for Fitch. A previous round of crisis stimulus via discretionary spending in 2008-2009 was subsequently reversed (at the cost of slowing the economic recovery) with the federal deficit falling to 2.4% of GDP in 2015, but, despite this, the upward trajectory of the government debt ratio has not been arrested and deficits have grown again since then. The prospect of permanently higher budget deficits will weigh increasingly heavily on sovereign creditworthiness, as no political consensus has emerged over the difficult decisions about the path of future public spending and debt.

The stimulus package has yet to be officially assessed for its budget impact, but at a conservative estimate, the federal fiscal deficit will rise to over 13% of GDP in 2020 from 4.6% of GDP in 2019 (FY 2019). The general government deficit will widen further as states' and municipalities' finances will face increased demands, for example to pay unemployment benefits, and will absorb greater federal transfers. General government debt ended 2019 at around 100% of GDP but will rise to 115% of GDP by the end of 2020. This would put the debt ratio, absent consolidation, on course to surpass a level Fitch has previously considered inconsistent with 'AAA' status.

Fitch sees deteriorating debt dynamics as a growing risk to sovereign creditworthiness, notwithstanding the active support of the Federal Reserve and the historic fall in U.S. borrowing costs, with the yield on the 10-year Treasury at 1%. Even at very low interest rates, recurrent deficits will still drive an increase in debt/GDP. Over the next decade, government debt/GDP was already set to trend upward, driven by higher spending on social security and especially healthcare spending. A recession will likely bring forward the point at which federal programs' trust funds are exhausted and, absent reform, federal budget allocations go to shore up these programs.

Fitch believes that recent dislocations and illiquidity in the market for U.S. Treasuries reflect changes in the structure of the market and exceptional conditions, and do not signal heightened perceptions of U.S. credit risk on the part of investors. The U.S.'s safe haven properties may nevertheless be tarnished, particularly if it emerges from the crisis economically weakened and with much higher debt. Moreover, a squeeze on U.S. dollar liquidity around the world, characterized by dollar appreciation, has again highlighted weaknesses in the global financial architecture and could hasten a shift toward financing in other currencies.

The U.S. is scheduled to hold elections in early November. Former vice president Joe Biden is the presumptive Democrat nominee to run against Donald Trump. Democrats are expected to retain their House majority but fall short of retaking the Senate, while the outcome of the presidential contest is more uncertain. The pandemic threat and the government's response could change the policy debate in significant ways, possibly in favor of a stronger safety net and more public health spending. Fitch would expect a Democrat administration to pursue higher public spending, partially offset by tax raises.