Authored by Mark Glennon via WirePoints.org,

Why exactly doesn’t Illinois’ political establishment recognize that only drastic policy changes will reverse the population outflow crippling the state? That was the subject of our monthly Crain’s article. A new meme is afoot providing one answer, started by Richard Porter, a Chicago lawyer and GOP national committeeman.

First, a little science lesson. Throw a frog into boiling water and he’ll scramble out, but do they really stay put if you start with a comfortable temperature and gradually raise it until boiling?

Nope. Scientists have shown they’ll jump out as the water gets warmer. Researchers had to remove their brain to get them to stay as they raised the temperature, even though they remain functional enough to show discomfort.

In other words, only brainless frogs stay put as the temperature becomes deadly. That’s Porter’s point. The establishment expects you to be brainless frogs. 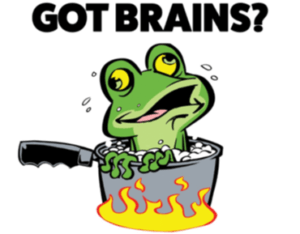 The establishment surely knows the real science, since they routinely call everybody else “science haters.” So, surely they don’t believe the mythical version and think everybody will stay if they just gradually raise taxes, incur more debt and ignore reforms.

They must know the real science, and are betting that everybody will stay because they’re brainless frogs. How else could Gov. J.B. Pritzker expect us to accept his explanation for the state’s population loss, now five years running. He says it’s stability Illinoisans want - the fiscal stability he says they will get from tax increases.

Chicago’s African Americans with lower incomes may be the most rational part of the exodus. Their flight accounts for almost all of Chicago’s population loss, as Crain’s, the Metropolitan Planning Council and many others have documented. Three-fourths of them left for other states, according to the council.

That’s smart. For the underprivileged, moving is a ticket to upward mobility. Moving is the simplest and wisest solution for many.

That may sound harsh, but research is proving it’s true. That research is detailed in a Vox articlethis month on families reliant on housing assistance. The economic consequences of moving to places with more opportunity could be massive, says one researcher the article quoted, who estimates that the lifetime benefit to a newborn child of moving from a low- to high-opportunity neighborhood is about $210,000 in additional income, or an 8.1 percent increase in lifetime earnings.

Seattle recently put that research to work by providing information and counseling encouraging housing voucher recipients to move to better places. It worked. “This is the largest effect I’ve ever seen in a social science intervention,” another researcher told Vox.

Statewide, however, all demographic groups are part of the exodus, and it’s costing us dearly. On that, see the detailed, three-part series just completed by my colleagues Ted and John, linked here, here and here.

Illinois’ collapse won’t be reversed unless it’s exodus is reversed. Nothing could be clearer. So far, it’s difficult to find a word from leading officeholders even acknowledging the problem.