As America shelters in place to isolate from COVID-19, people have been avoiding potential exposure by ordering necessary items from Amazon. 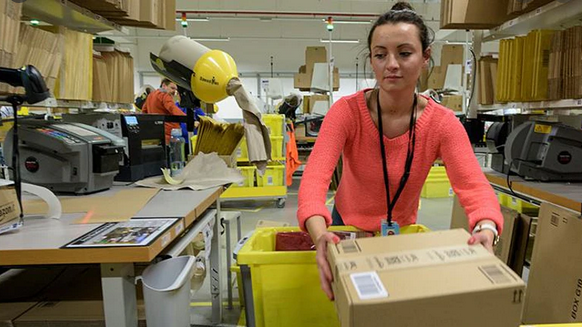 Anyone who has been disinfecting Amazon deliveries is ahead of the curve, as workers across 10 Amazon warehouses have tested positive for the disease, according to the Washington Post - owned by Amazon founder Jeff Bezos.

Just last week, warehouse workers sounded alarms that the company is not doing enough to protect them from the virus. That came after workers at Amazon warehouses in Spain and Italy tested positive for the virus. Since then, more than 1,500 workers from around the world have signed a petition that calls on the company to take additional steps to ensure safety in the workplace.

Some workers complained that Amazon pushes them to meet the per-hour rate at which it wants orders fulfilled, a practice that they worry discourages safe sanitary practices such as washing hands after a cough or sneeze. Others have complained about “stand-up” meetings, where workers stand shoulder-to-shoulder at the start of each shift. -Washington Post

According to recent data from the NIH, coronavirus can live for up to four hours on copper, 24 hours on cardboard, and three days on plastic and stainless steel. That said, it was recently discovered living on surfaces up to 17 days after passengers disembarked but before the ship was cleaned.

The outbreaks come after the company pledged to hire 100,000 new workers to deal with the avalanche of orders amid the global pandemic - leaving the company unable to stock and ship household staples to customers.

"We are supporting the individuals, following guidelines from local officials, and are taking extreme measures to ensure the safety of all the employees at our sites," said company spokeswoman Lisa Levandowski in an emailed statement.

Meanwhile, Amazon has begun implementing new procedures to disinfect their facilities, such as cleaning doorhandles, handrails, touch screens and more according to Levandowski. The company has also halted stand-up meetings, staggered break times, and suspended worker screening as they leave in order to aid in social distancing and improve the flow of personnel in and out of buildings.

Still, Amazon has run into difficulty supplying workers with necessary equipment - having placed orders for "millions of face masks" for employees and contractors who can't work from home, according to a Saturday letter Bezos sent to employees.

Despite the outbreak, Bezos says he expects the company's warehouses to remain in operation - telling employees that "much of the essential work we do" requires employees to be physically present at warehouses, driving delivery vehicles, and more.

The company has over 175 warehouses around the world - 110 of which are in North America.

Despite the spread of the coronavirus in Amazon’s U.S. warehouses, it probably will find workers for the new posts, said Elaine Kwon, founder of e-commerce management and software firm Kwontified and a former Amazon manager. With unemployment claims already soaring as businesses shutter from the coronavirus fallout, laid off workers will need income to pay their rents and feed their families.

“Quite a few people will be willing to take the risk,” Kwon said. -Washington Post

The Post notes that Amazon has come under fire for their treatment of warehouse employees - fighting efforts to unionize around the world while facing harsh criticism for poor working conditions.